A glorious career spanning over thirty years, including chartbusters and ultra glamorous outfits, Italian fashion designer Giambattista Valli interviews the Australian singer on her relationship with music, creativity and fashion. From the beginning in the 1980s to the present: from Locomotion to Golden.
Influencing an entire generation over three decades, Kylie Minogue, chameleon-like, has changed her face and look countless times, always with the same contagious energy. Her last album, released in the end of June, Step Back in Time: The Definitive Collection” (BMG, Warner distribution) is a collection of her greatest hits: from I Should Be So Lucky from the 80s, to the duet Where The Wild Roses Grow with Nick Cave & The Bad Seeds, and the inevitable I Can’t Get You Out Of My Head from the Fever album, awarded with five platinum records.
Giambattista Valli: Let’s start with a trivial question. What prompted you to become a singer?
Kylie Minogue: I didn’t wake up one day thinking that I want to be a singer. I gradually became aware of it as a child. My first memory related to music goes back to when I was nine years old and attended a rhythm course. Then I took violin lessons and for a few years played the piano, and even the flute at school. As for singing, I began to get excited from the age of eight or nine: my first memories are related to Grease, Abba, to the Bad Girls album by Donna Summer, which I sang from beginning to end (without understanding the meaning, of course). That's how I started fantasising about a future as a singer. I don’t remember if it was a concrete aspiration, but it is certainly a dream that has accompanied me throughout my childhood. At the age of 16, I started studying singing. I had acted in some television series and put aside some money, which I invested in lessons and recorded a demo. The rest is history. After the experience in the Neighbors (series), I launched a single.


GB: How does your creative path work?
KM: I don’t use a copy-paste method to compose my songs. I didn’t write the lyrics for the first records: Stocks Aitken & Waterman dealt with them through PWL Records. But after a while, a sense of frustration took over, because I wanted to have more say in the matter. So, slowly I started writing them and now it’s one of the favourite aspects of my work. On the other hand, I stopped playing, despite having learnt various instruments. I abandoned them all after growing up. I still seem to hear my grandfather’s voice telling me, “You’ll regret having stopped studying music,” and that’s exactly what happened. Every song is different. It may happen that I arrive in the studio and my team has already started working on a track, then I come to think of a melody or a rhythm. Sometimes I have a feeling that I want to pull out, or there is a phrase buzzing in my head and I need somebody to create its music. So, that's how it all work.
GB: You wrote an important chapter in the history of international pop. What do you feel when you listen to yourself on the radio?
KM: I still find it very exciting. The first time it happened in Australia, in 1987, with the song Locomotion; I went crazy after hearing it on the radio. Today it is possible to listen to a song always and everywhere, but at that time resources were limited and radio stations were few. Everyone tried to get their song through; then came I, the soap opera girl who decided to throw herself in the deep end by launching her first single. Even today when a new single comes out, I always feel the same emotion on the first radio pass.


GB: How do you manage to reinvent yourself every time?
KM: I am curious by nature. There is an almost insatiable curiosity, and to make matters worse, I am a Gemini. In the past, questions about ''reinventing myself''used to trouble me. Reinvention does not happen overnight. If you spend days with yourself, the change is not as sudden as it appears on the outside. Therefore for me, it is not a reinvention, but a constant evolution. I never take it for granted and expect people to accept my evolution. There is this sense of maturity and experience, as I grow up. Some experiences are resounding successes while others, total fiasco

GB: In June, you celebrated thirty years of your career with Step Back In Time: The Definitive Collection. What inspired you to reinvent yourself musically? How did your look change?
KM: I’ll give you two examples: Golden, this album including greatest hits, had a lot of country influences, so we went in that direction even with the look. If instead we think of Fever, released in 2001, the sound was more electronic and cold, and so was the look.

GB: What approach did you adopt over the years to create your outfits?
KM: I went by trial and error, learning from my mistakes. When I was little, my grandmother taught me to sew, design patterns, to make clothes with a machine, and knitting, as well. It was she who took care of my stage clothes, just as she did for my mother, both as a girl, and for her work as a dancer. I succeeded at the end of the 80s, a decade that is coming back into fashion, but for almost all the 90s, I tried to overcome the phase: big hair, giant earrings and huge shoulder pads. In the midst of all this, I was small and petite. If there is a concept attached to the album, the look is dictated by the music. Otherwise, I happen to oscillate between periods. When I have no idea of ​​the latest trends, I ask myself, “It has been working for years, why change?''. A pretty dress, light as a feather, with a masculine cashmere cardigan on it is my 90s outfit. I will never abandon it nor a pair of jeans with a shirt. If I was not a pop star, I would probably not be so attached to fancy outfits. I have realised that the best part of a larger then life ensemble lies in the emotion of wearing it with the right attitude: putting it on, showing it and taking it off. What happens in between — whether it’s a dinner, a social evening or an award ceremony — you remain unfazed.


GB: In addition to making music, you actually create fashion. What are the outfits you are most attached to?
KM: The Mr. Pearl corset commissioned by John Galliano could be a good starting point. Galliano had made both costumes for my Showgirl tour: they were real works of art, a nightmare to wear, but an incredible show for the public, as well as a true fashion statement for me. Speaking of style statements, I hate to talk about it again, but that white one in the Can’t Get You Out Of My Head video looked like a rag. Keeping the sense of modesty, while wearing it was a real challenge. And, then there are the golden hot pants that a friend of mine bought in a thrift store for 50 pence. If I had to mention one of my looks that became iconic, it would be those hot pants: they stayed in my closet for months, and when we were about to shoot the video they somehow popped up. In one of my most distressing nightmares (I have several), it happens that they call me on stage and I don’t find the costumes. What happened to them? Why doesn’t anyone listen to me? There is a close link between the performance and the clothes you wear on stage. Often, before a concert or an exhibition, I say to myself, “I can’t do it with these shoes, but they are beautiful, so I have to wear them.” It’s a game of balance. We must compromise and ask ourselves: what should I give precedence to? How much can I dare? Can I really perform without anyone noticing the torture I am inflicting on myself? It’s complicated.


GB: Your biggest regret and a dream for the future.
KM: My biggest regret... I wanted to keep a journal. Today, we have so many memories thanks to mobile phones, but when I made my first international trip outside Australia, everything was different. I would have liked to be able to re-read everything that I have done and the moods I have experienced. For the future, my dream is to simply continue to live the stimulating and rewarding moments, spread joy and share emotions with the audience at the same time. 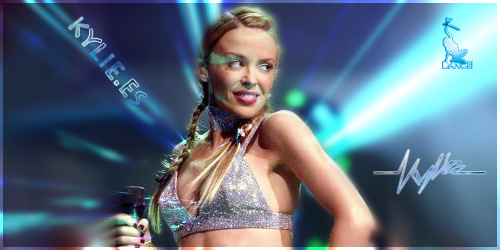 
Powered by phpBB ® | phpBB3 theme by KomiDesign
GZIP: Off